Solarflexion joined EnergyBin in mid-December 2018.  The company was looking for a solution to speed up time spent sourcing solar equipment.  Solarflexion also wanted to connect with new qualified buyers.  EnergyBin made it possible to do both at an affordable, no-strings-attached membership fee.  Now, Solarflexion has integrated EnergyBin as part of their daily operations.

Not enough time in the day

Rebecca Sanchez takes her job as Vice President of Sales at Solarflexion very seriously.  She is constantly on the look-out for ways to gain efficiency for her sales team and the company.  When she noticed that a great amount of time was spent hunting down solar equipment, she questioned what could be done.

“We have many different channels that we buy product from, which can make for a long process to find what we need for our customers,” Rebecca explains, “We were spending a lot of time making phone calls, sending emails, and following up.  There’s only so much time in a day.”

Many of Solarflexion’s customers are searching for older equipment and replacement parts.  Other customers are looking to buy large quantities.  As customer requests stream in, it’s easy to fall into the trap of doing double or triple the work, which the company is careful to avoid.

“We started asking the question, ‘how could we be more efficient throughout the workday?’  With our business model, we don’t want to spend too much time having to hunt down product,” Rebecca remarks, “When we find five parts here, two parts there, and so on, time ticks by.”

Solarflexion needs to be efficient with their time because it keeps costs low, and it gets the job done faster.  Time matters for their customers’ project timelines as well.  The company does their best to give customers realistic timelines. 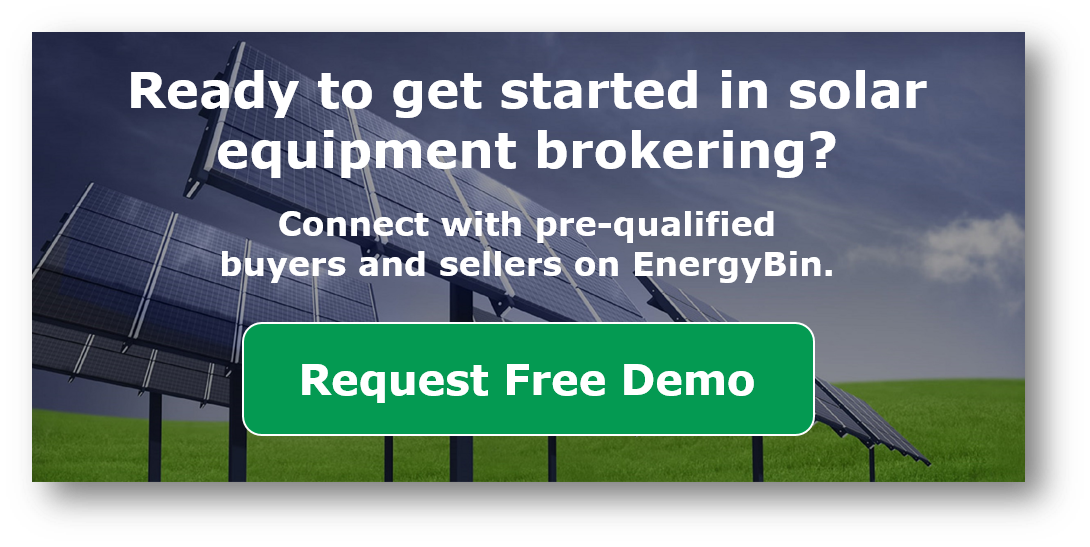 A bird's-eye view of the market

With close to 15 years of industry experience under her belt, Rebecca is well aware of what works and what doesn’t when it comes to business solutions.  She is scrupulous in testing new processes with respect to business goals.  Signing up for EnergyBin meant investing company resources, and she knew she needed to determine if it was worth the investment within a reasonable timeframe.

Solarflexion got to work integrating EnergyBin into the team’s daily operations.  At the beginning of each day, employees pull up the EnergyBin platform on their computers.  They review the Want-to-Buy and Want-to-Sell broadcasts and are quick to jump on opportunities for sales they can fill.  EnergyBin remains open on their screens all day, so employees can easily search product listings and make connections with other companies.

“EnergyBin makes it easier for us to get a bird’s-eye view of everything all at once,” Rebecca notes, “Plus, we’re making quality connections with other members for possible future business.  In turn, other companies are learning who we are and what we have to offer.”

A big sale and a pleasant surprise

The effort Rebecca’s team took to implement EnergyBin into their daily process produced results that surprised Rebecca.  Not only did they make quality connections with a new group of buyers and sellers, they also accomplished a big sale under a time crunch.

One of Solarflexion’s distributors contacted Rebecca with a challenge.  They wanted to clear a large amount of racking from their warehouse.  They needed to sell the racking as a single lot, and they wanted it gone by the end of March.  This call came in on March 13th.

“I accepted the challenge because I knew I had EnergyBin,” Rebecca recalls, “After I got off the phone with our distributor, I called my rep at EnergyBin.  He advised me through the broadcast process.  We sent off the broadcast email, and within a few hours, we had interest from a buyer.  At first, I didn’t believe it.  But then he bought the entire lot, and the deal was complete within 24 hours.”

Rebecca was shocked that it happened that fast – less than one day – and thought surely EnergyBin is going to take a cut of the sale.  She called back her rep to ask about the transaction fee, who clarified that EnergyBin does not charge a transaction fee.

“What really made my day is that EnergyBin didn’t want a percentage of that order.  No transaction fees – just a simple, no-strings-attached membership payment.  I like that!”

Solarflexion achieved 100% ROI from one deal brokered on EnergyBin.  Rebecca feels like part of her wants to keep EnergyBin a secret, while the other part wants to tell everyone that it is a wonderful tool.

As an up-and-coming company, Solarflexion’s biggest priority is continued growth.  With three months’ of outcomes from using EnergyBin to review, Rebecca and her team can make an informed decision about next steps.  One area of exploration entails how they can best position product for sale on EnergyBin.

“Now, we’re looking at some of our older inventory that’s been sitting on the shelf but is still quality product,” Rebecca reports, “We want to get it out there.  Why are we sitting on it when someone else could potentially use it?”

She knows for certain that more activity on the EnergyBin platform will lead to more outcomes, which is good for her team’s efficiency rate and for her company’s success.

“EnergyBin works.  Within 24 hours, we finalized our first major sale.  To me, that’s eye-opening.  It is business-changing.  EnergyBin is a genuine tool for success for Solarflexion.”

Solarflexion, Inc. is a leading provider of high-quality parts for various solar applications. Reliable product offerings support residential, commercial and industrial projects. Solarflexion’s experienced sales team utilizes a vast network of suppliers to ensure customers receive outstanding products at exceptional prices with superior customer service. Solarflexion specializes in system design, materials procurement and drop-ship solutions. The company philosophy focuses on the customer’s needs – “We provide the best for our customers so we can provide the best for our families. ™” Contact Solarflexion for solutions tailored to your budget and energy needs.